Skip to content
The Comfac Global Group recently celebrated the second anniversary of the Little Haus Dalahican Community Center in Dalahican, Lucena City with gift-giving activities to its scholars and to the kids of the Badjao community. As part of the celebration, CGG invited Santa Claus in the person of Austrian businessman Wolf Lutz. The anniversary celebration started with a special mass celebrated by Fr. Martin Mroz, and followed by the gift-giving to 180 scholars from the elementary and high school levels. A Santa motorcade and distribution of gifts to more than 60 Badjao kids later followed. Present during this event were CGG chairman Jaime Aquino and Raymond Lacdao, executive director of the Business Process Assocation of the Philippines (BPAP).

The Comfac Global Group’s “Kapwa Kalinga” program recently gave cash assistance to the victims of Typhoon Yolanda (international name: Haiyan) in Leyte, Samar and Aklan.   The relief aid came in the form of cash assistance of P1,000 each to selected families whose homes were totally damaged by the typhoon. Comfac Global Group’s chief finance officer Erlinda Rolda traveled to Leyte and Samar while corporate communications manager Jose Lynnie Ramo visited the typhoon victims in Aklan.   The cash assistance was given to the typhoon victims to help them buy materials to rebuild their homes and rebuild their lives.

The Comfac Global Group recently held its roadshow exhibit and seminar in the cities of Cagayan de Oro and Davao. The event, “Technology Solutions Forum: Managing the IT Infrasturcture” will also be held in Cebu in February 2014.   The seminar featured Comfac’s business partners Panduit, Calvelo Engineered Systems and Emerson Network Power, discussing timely topics on new technologies and applications on data center and infrastructure management.    The Cebu leg of the Technology Solutions Forum originally scheduled on November 21st was postponed because of the national tragedies brought about by the recent earthquake and Typhoon Yolanda. The event will push thru on the first week of February 2014. 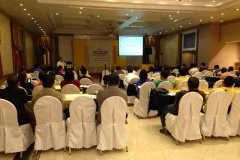 ESCO recently sponsored the 2013 Sportsfest for Dalahican and Talao-talao scholars held at the San Roque chapel grounds and the beachfront of Talao-talao, in Lucena City.   The sporstfest participated in by about 160 elementary and high school scholars of the Payatas Orione Foundation and the Comfac Global Group is an annual event sponsored by ESCO and organized by PAOFI under the leadership of Fr. Martin Mroz. The sportsfest featured track events, fun games and a cheering competition and was intended to foster camaraderie and build leadership skills among all participants.   ESCO sent its officers and staff to manage the day-long event, together with the Corporate Communications staff.

Greetings! On behalf of HGS, we would like to inform you and your company that based from our recently conducted Vendor Performance Evaluation, your company garnered satisfactory results in all the concerned areas (Quality , Delivery , Expertise & After Sales Support) HGS is looking forward to the same quality of performance from your company to further strengthen our excellent partnership. All the best, Antonio P. Sanoy – Senior Manager, Procurement & Logistics

ESCO recently donated a Bahay Kubo to be used as Community Learning Center for the Badjao children in Talao-Talao and Dalahican, in Lucena City. The Bahay Kubo will be the center of activities in promoting literacy among the children of Badjao fmilies living in the coastlines of Dalahican. The kids, around 82 with ages from 4 – 12 years old, will be taught basic reading and writing and prepare them for integration in the public school system. ESCO officers Mon de la Isla and Aaron Castillejo with Jose Ramo attended the turn-over rites of the Bahay Kubo to the Payatas Orionne Foundation led by Fr. Martin Mroz. A food-feeding program and gift giving immediately followed the turn-over ceremonies.
The Comfac Global Group was one of the sponsors for the Institute of Solidarity in Asia 2012 Performance Governance System (PGS) Boot Camp held recently at the Amorita Resort in Panglao Island, Bohol. The Boot Camp was attended by more than 120 officers of LGUs and national government agencies. The PGS boot camp is a basic course for the technical working groups in charge of leading the governance program in the local government units and government agencies. The boot camp provided both technical and values-oriented formation and promoted transparency and excellence in government service while encouraging community-building among public sector institutions that share a desire for long-term reform. The Comfac Global Group is one of the institutional members of the Institute for Solidarity in Asia for the last few years. During the 2012 boot camp, Comfac displayed its RFID technology as part of the registration and monitoring system. CGG Chairman of the Board Jaime Aquino attended the ISA Boot Camp 2012, together with Jose Ramo, Cebu branch manager Alfred Lim, and Ryan Canja. The technical team included Mike Tangki-on, Awel Veralio, Gil Samonte and Herbert Sural.
Dupont, the world’s leading manufacturer of industrial and chemical products, recently inaugurated its new corporate headquarters at I Square at Ortigas Center. Dupont’s affiliate call center company, Coastal, likewise inaugurated its new contact center facility also located in the same building. Dupont is a global leader serving markets as diverse as agriculture, nutrition, electronics and communications, safety and protection, home and construction, transportation and apparel. It relocated its corporate headquarters from Makati to Ortigas and consolidated its operation with Coastal in one location. Dupont and Coastal are total fit-out projects, and the appointment of the Comfac Global Group as the fit-out contractor came after a careful selection process involving management of the two organizations.